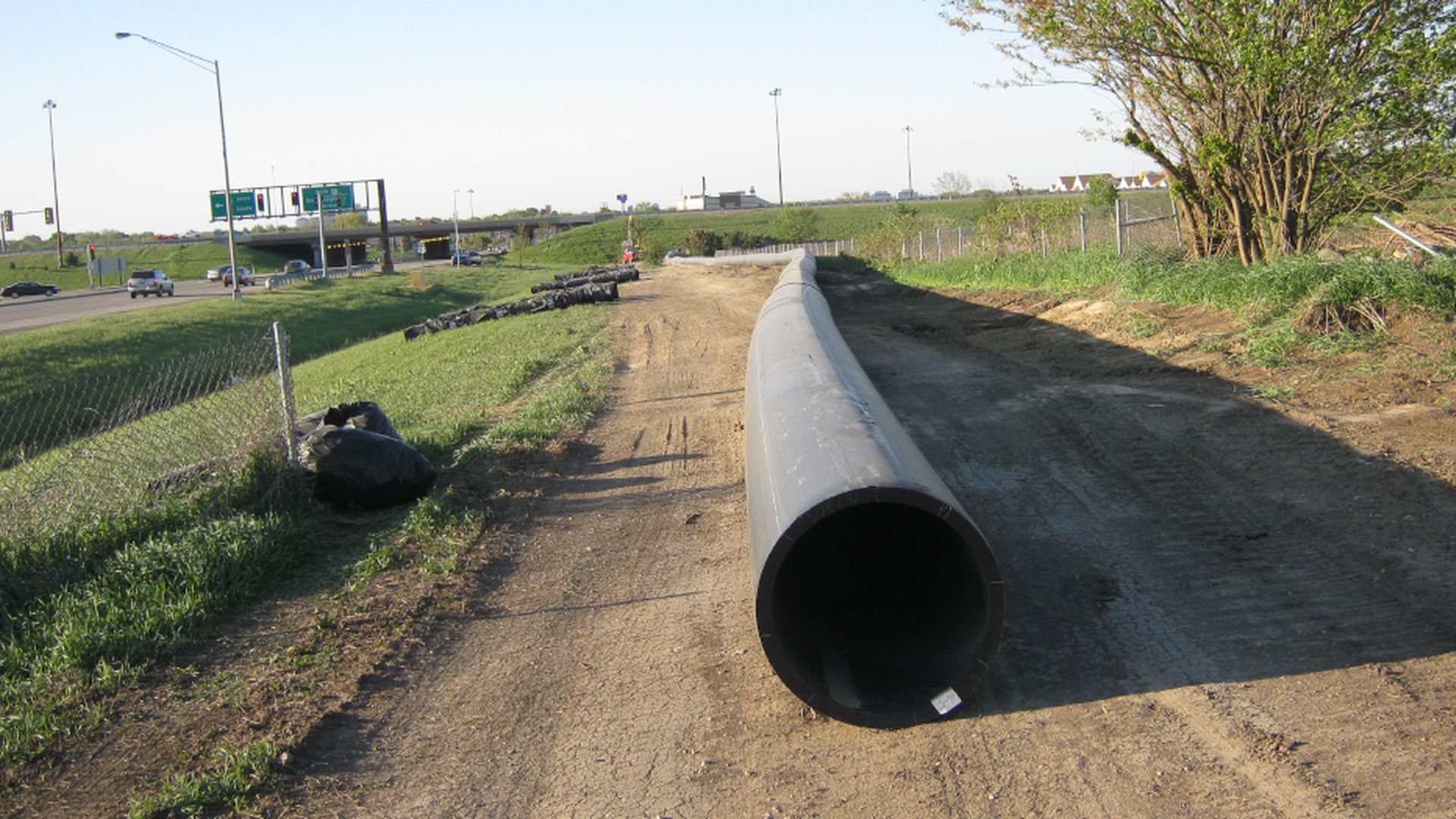 In above ground applications PE piping may be suspended or cradled in support structures or, it may simply be placed directly on the ground surface. These types of installations may be warranted by any one of several factors. One is the economic considerations of a temporary piping system. Another is the ease of inspection and maintenance.

Still another is simply that prevailing local conditions and even the nature of the application itself may require that the pipe be installed above ground. PE pipe provides unique joint integrity, toughness, flexibility, and low weight. These factors combine to make its use practical for many “above-ground” applications.

This resilient material has been used for temporary water lines, various types of bypass lines, dredge lines, mine tailings, and fines-disposal piping. PE pipe is used for slurry transport in many industries such as those that work with kaolins and phosphates. The ease of installation and exceptional toughness of PE pipe often make it practical for oil and gas collection.

The economics and continued successful performance of this unique piping material is evident despite the extreme climatic conditions that may sometimes exist in some of these diverse applications.

Conditions and effects which can influence the behavior and thus, the design of above ground PE piping systems include:

The diversity of applications for which PE pipes are used in above-ground applications reflects the usable temperature range for this material. Above-grade installations are usually exposed to demanding fluctuations in temperature extremes as contrasted to a buried installation where system temperatures can be relatively stable.

Irradiation by sunlight, seasonal changes, and day-to-night transitions can impose a significant effect on any piping material installed above the ground. As a general rule, PE pipe for pressure applications can be safely used at temperatures as low as -40°F (-40°C) and as high as 140°F (60°C). For non-pressure service, the allowable temperature range widens up to 180°F (82°C).

There are a few PE piping materials that have qualified for a pressure rating at 180°F. The interested reader is advised to consult with the PPI for more information on these materials. However, PE is a thermoplastic material and, as such, these extremes impact the engineering properties of the piping.

The apparent modulus of elasticity increases as temperatures are lowered. In effect, the pipe becomes stiffer but retains its ductile qualities. The actual low temperature embrittlement of most PE is below -180°F (-118°C). In actual practice, PE pipe has been used in temperatures as low as -75°F (-60° C).

Obviously, service conditions at these extremes may warrant insulation to prevent heat loss and freezing of the material being conveyed. It should be noted that in extreme service applications operating at high pressure and increasingly lower temperature that the ability of some PE piping materials to absorb and dissipate energy such as that associated with sudden impact may be compromised.

In these situations, it is possible that, with the addition of a sustaining or driving force, a through-wall crack can form which is capable of traveling for significant distances along the longitudinal axis of the pipe. This phenomenon is generally referred to as rapid crack propagation or RCP, and can occur in any pressure piping or pressure vessel design regardless of the material of manufacture.

This type of phenomenon is generally not experienced in PE in liquid transport applications as the energy dissipation associated with the sudden release of fluid from the pipe mediates the driving force required to sustain the crack. Gas or compressed air handling applications do not provide for the dissipation of energy and, as such, a driving or sustaining force is a potential possibility.

For these reasons, the operation of PE pipe above ground in extremely cold environments (<32°F) should be carefully researched in light of the potential application and prevailing service conditions. The reader is referred to the pipe manufacturer for additional information regarding RCP and specific design measurers for above ground, cold weather installations.

The coefficient of linear expansion for unrestrained PE pipe is approximately ten times that of metal or concrete. The end result is that large changes in the length of unrestrained PE piping may occur due to temperature fluctuations.

While the potential for expansion (or contraction) is large when compared with that of metal, concrete, or vitrified clay pipe, note that the apparent modulus of elasticity for PE is substantially lower than that of these alternative piping materials.

The stresses imposed by contraction or expansion of a PE piping system are usually on an order of 5% to 10% of those encountered with rigid piping materials.

Standard pressure ratings for PE pipe are for water at 73°F (23°C). Also, as is well established, in common installations either below or above ground, PE pipe will not rust, rot, corrode or be subject to galvanic corrosion. However, if the pipe is intended for the conveyance of a fluid other than water or, if it is intended to be installed in a chemically aggressive environment, consideration should be given to the appropriateness of the assigned standard pressure rating.

Continuous exposure to certain substances can result in a reduction in the long-term strength of the PE material due to chemical attack or adsorption. In some cases, such as with strong oxidizing or other agents that chemically attack PE, a gradual and irreversible reduction in strength may seriously compromise performance properties.

In these cases the useful service life depends on the chemical aggressiveness of the agent, its concentration, total time of exposure and temperature. There are many cases where even though there is gradual chemical attack, PE pipe still offers sufficiently long life and is the most economical alternative.

In cases where PE piping is exposed to liquid hydrocarbons, a small adsorption of these materials into the pipe wall can occur which may result in a decrease in long- term strength. The effect is limited by the maximum amount of hydrocarbon that can be adsorbed which depends on the nature of the hydrocarbon and the temperature of the service.

This effect on long-term strength is generally limited because hydrocarbon adsorption does not attack PE’s chemical structure. Further, it should be noted that adsorption may slowly reverse when exposure to the hydrocarbon is decreased or removed.

For lighter weight hydrocarbons such as condensates of gaseous hydrocarbons, adsorption reversal may occur within weeks or months after removal from exposure. However, the reverse adsorption of heavier liquid hydrocarbons may be so slow that the effect may be considered permanent.

When PE pipe is utilized outdoors in above-ground applications, it will be subjected to extended periods of direct sunlight. The ultraviolet component in sunlight can produce a deleterious effect on the PE unless the material is sufficiently protected.

Weathering studies have shown that pipe produced with a minimum 2.0% concentration of finely divided and evenly dispersed carbon black is protected from the harmful effects of UV radiation for indefinite periods of time.(18) PE pipe that is protected in this manner is the principal material selected for above-ground installations.

Black pipe (containing 2.0% minimum carbon black) is normally recommended for above-ground use. Consult the manufacturer’s recommendations for any non-black pipe that is either used or stored above ground.

Any piping material that is installed in an exposed location is subject to the rigors of the surrounding environment. It can be damaged by the movement of vehicles or other equipment, and such damage generally results in gouging, deflecting or flattening of the pipe surfaces.

If an above-ground installation must be located in a region of high traffic or excessive mechanical abuse (along a roadway, etc.), the pipe requires extra protection. It may be protected by building a berm or by encasing the pipe where damage is most likely. Other devices may be used, as appropriate to the situation.

Design criteria for the installation of buried flexible thermoplastic pipe should be used for those areas where the above-ground PE system must pass under a roadway or other access, and where an underground installation of a portion of the system is necessary.

In general, in a pressurized installation in which any section of PE pipe has been gouged in excess of 10% of the minimum wall thickness, the gouged portion should be removed and replaced. This has long been an established procedure in the use of smaller diameter (up to 16-inch) PE pipe in natural gas applications. However, it is noted that this rule only applies to smaller size pipe.

Therefore, for any gouges or damage to larger pipe sizes with thicker walls, the user is advised to consult the manufacturer for assistance. When the PE pipe has been excessively or repeatedly deflected or flattened, it may exhibit stress-whitening, crazing, cracking, or other visible damage, and any such regions should be removed and replaced with new pipe material. Read Full PDF

How To Install HDPE Conduit Professionally?

Inspection, Maintenance And Repair Of Corrugated HDPE And Polypropylene Pipes

The Impact Of HDPE In The Telecommunications And Power Industry

How To Properly Join HDPE Conduits In The Field?

How To Safely Handle And Transport HDPE Conduits & Pipes?