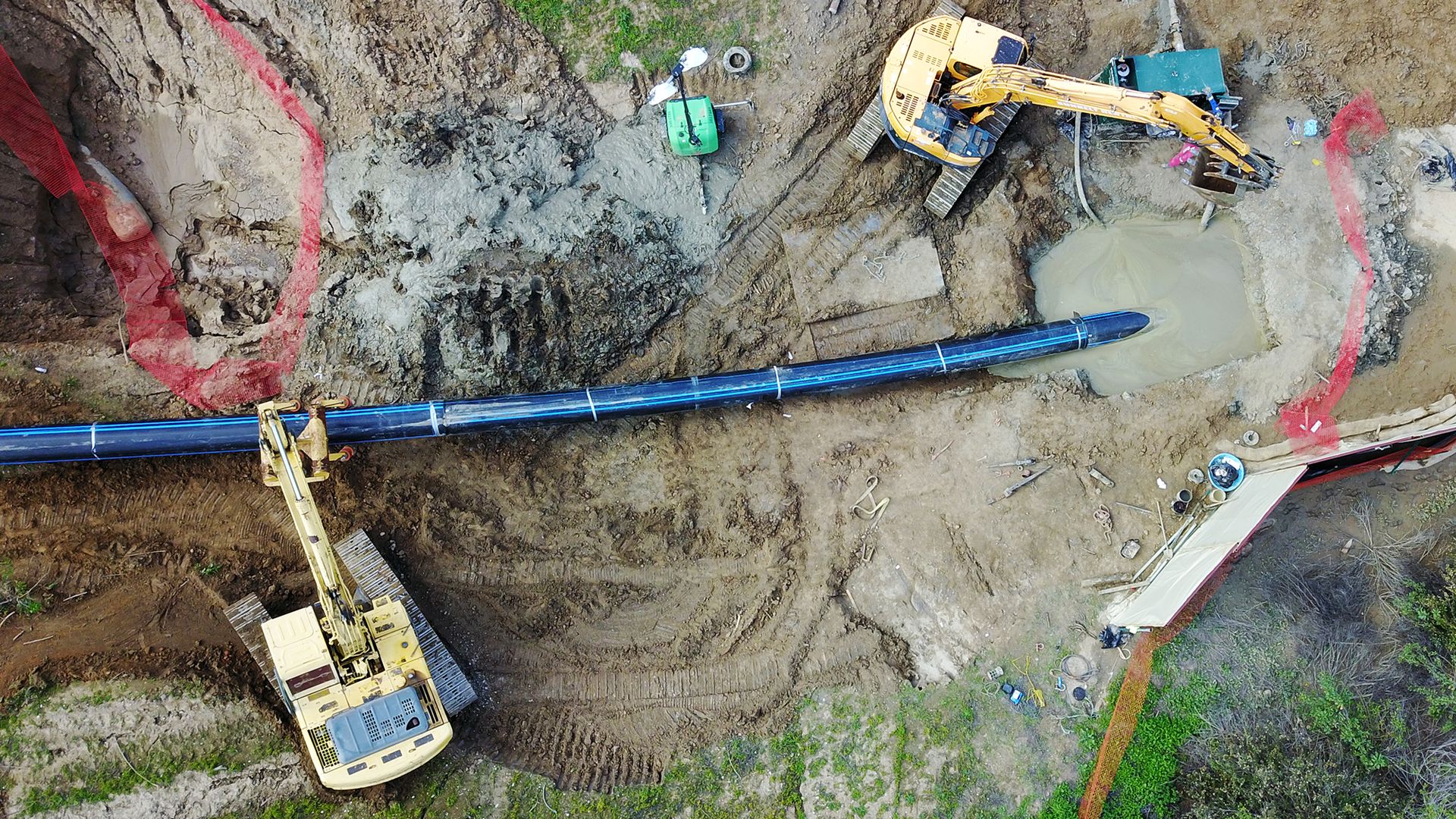 Horizontal Directional Drilling (HDD) process begins with boring a small, horizontal hole (pilot hole) under the crossing obstacle (e.g. a highway) with a continuous string of steel drill rod. When the bore head and rod emerge on the opposite side of the crossing, a special cutter, called a back reamer, is attached and pulled back through the pilot hole.

The reamer bores out the pilot hole so that the pipe can be pulled through. The pipe is usually pulled through from the side of the crossing opposite the drill rig.

Pilot hole reaming is the key to a successful directional drilling project. It is as important to an HDD pipeline as backfill placement is to an open-cut pipeline. Properly trained crews can make the difference between a successful and an unsuccessful drilling program for a utility.

Several institutions provide operator training programs, one of which is University of Texas at Arlington Center for Underground Infrastructure Research and Education (CUIRE). Drilling the pilot hole establishes the path of the drill rod (“drill-path”) and subsequently the location of the PE pipe.

Typically, the bore-head is tracked electronically so as to guide the hole to a pre-designed configuration. One of the key considerations in the design of the drill-path is creating as large a radius of curvature as possible within the limits of the right-of-way, thus minimizing curvature.

Curvature induces bending stresses and increases the pullback load due to the capstan effect. The capstan effect is the increase in frictional drag when pulling the pipe around a curve due to a component of the pulling force acting normal to the curvature.

The designer should minimize the number of curves and maximize their radii of curvature in the right-of-way by carefully choosing the entry and exit points. The driller should also attempt to minimize extraneous curvature due to undulations (dog-legs) from frequent overcorrecting alignment or from differences in the soil strata or cobbles.

The REAMING operation consists of using an appropriate tool to open the pilot hole to a slightly larger diameter than the carrier pipeline. The percentage oversize depends on many variables  including soil types, soil stability, depth, drilling mud, borehole hydrostatic pressure, etc.

Normal over-sizing may be from 1.2 to 1.5 times the diameter of the carrier pipe. While the over-sizing is necessary for insertion, it means that the inserted pipe will have to sustain vertical earth pressures without significant side support from the surrounding soil.

Prior to pullback, a final reaming pass is normally made using the same sized reamer as will be used when the pipe is pulled back (swab pass). The swab pass cleans the borehole, removes remaining fine gravels or clay clumps and can compact the borehole walls.

Usually a “drilling mud” such as fluid bentonite clay is injected into the bore during cutting and reaming to stabilize the hole and remove soil cuttings. Drilling mud can be made from clay or polymers. The primary clay for drilling mud is sodium montmorillonite (bentonite).

Properly ground and refined bentonite is added to fresh water to produce a “mud.” The mud reduces drilling torque, and gives stability and support to the bored hole.

The fluid must have sufficient gel strength to keep cuttings suspended for transport, to form a filter cake on the borehole wall that contains the water within the drilling fluid, and to provide lubrication between the pipe and the borehole on pullback. Drilling fluids are designed to match the soil and cutter.

They are monitored throughout the process to make sure the bore stays open, pumps are not overworked, and fluid circulation throughout the borehole is maintained. Loss of circulation could cause a locking up and possibly overstressing of the pipe during pullback.

Drilling muds are thixotropic and thus thicken when left undisturbed after pullback. However, unless cementitious agents are added, the thickened mud is no stiffer than very soft clay. Drilling mud provides little to no soil side-support for the pipe.

The pullback operation involves pulling the entire pipeline length in one segment (usually) back through the drilling mud along the reamed-hole pathway. Proper pipe handling, cradling, bending minimization, surface inspection, and fusion welding procedures need to be followed.

The Industry distinguishes between mini-HDD and conventional HDD, which is sometimes referred to as maxi-HDD. Mini-HDD rigs can typically handle pipes up to 10” or 12” diameter and are used primarily for utility construction in urban areas, whereas HDD rigs are typically capable of handling pipes as large as 48”diamter.

The designer will achieve the most efficient design for an application by consulting with an experienced contractor and a qualified engineer. Here are some general considerations that may help particularly in regard to site location for PE pipes:

Safety is a primary consideration for every directionally drilled project. While this chapter does not cover safety, there are several manuals that discuss safety including the manufacturer’s Operator’s Manual for the drilling rig and the Equipment Manufacturer’s Institute (EMI) Safety Manual: Directional Drilling Tracking Equipment.

Before any serious thought is given to the pipe design or installation, the designer will normally conduct a comprehensive geotechnical study to identify soil formations at the potential bore sites. The purpose of the investigation is not only to determine if directional drilling is feasible, but to establish the most efficient way to accomplish it.

With this information the best crossing route can be determined, drilling tools and procedures selected, and the pipe designed. The extent of the geotechnical investigation often depends on the pipe diameter, bore length and the nature of the crossing.

During the survey, the geotechnical consultant will identify a number of relevant items including the following:

(Supplemental geotechnical data may be obtained from existing records, e.g. recent nearby bridge constructions, other pipeline/cable crossings in the area.)

For long crossings, borings are typically taken at 700 ft intervals. For short crossings (1000 ft or less), as few as three borings may suffice. The borings should be near the drill-path to give accurate soil data, but sufficiently far from the borehole to avoid pressurized mud from following natural ground fissures and rupturing to the ground surface through the soil-test bore hole.

A rule-of -thumb is to take borings at least 30 ft to either side of bore path. Although these are good general rules, the number, depth and location of boreholes is best determined by the geotechnical engineer.

River crossings require additional information such as a study to identify river bed, river bed depth, stability (lateral as well as scour), and river width. Typically, pipes are installed to a depth of at least 20 ft below the expected future river bottom, considering scour. Soil borings for geotechnical investigation are generally conducted to 40 ft below river bottom.

At that time, design of both the PE pipe and the installation can begin. The preceding paragraphs represent general guidance and considerations for planning and designing an HDD PE pipeline project. These overall topics can be very detailed in nature.

Individual HDD contractors and consultant engineering firms should be contacted and utilized in the planning and design stage. Common sense along with a rational in-depth analysis of all pertinent considerations should prevail.

Care should be given in evaluating and selecting an HDD contractor based upon successful projects, qualifications, experience and diligence. A team effort, strategic partnership and risk-sharing may be indicated.

The Impact Of HDPE In The Telecommunications And Power Industry

Inspection, Maintenance And Repair Of Corrugated HDPE And Polypropylene Pipes

How To Install HDPE Conduit Professionally?

How To Safely Handle And Transport HDPE Conduits & Pipes?